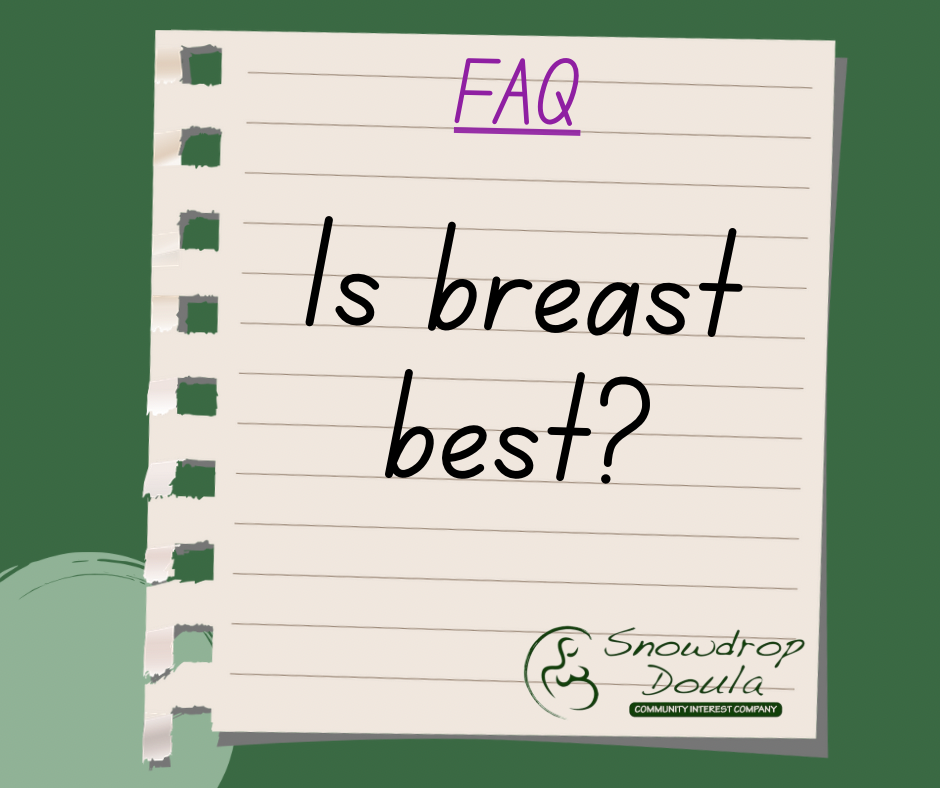 There are a few phrases used in infant feeding that, I feel, are not helpful to anyone and are problematic and even traumatising.  “ Breast is best”, “Fed is best” are two such phrases and here’s some reasons why I say this.

Neither are best and yet both are.

Whilst the evidence suggests that breastmilk is superior to formula milk in all it contains and what the act of feeding offers, it is arguable that in a middle class home in the UK these benefits are negligible. The effects on mental health of the mother and the baby due to the way an baby is fed can also be argued in various ways. I’d err on the side that, in general, breastfeeding has physiological benefits on mental health.

Simply saying “Breast is best” can cause a lot of stress for many. Whilst also not seem helpful at all for many reasons. After 16 years of supporting families most have said to me that this phrase does put pressure on mums because it suggests that if they aren’t breastfeeding then they aren’t doing the best for their child. No parent wants to think that. There are instances where breastfeeding may not be the best for that baby and/or that mum. A whole picture needs to be looked at. It’s also worth noting here that formula companies are those who brought this phrase into the dominance. Simple psychology theory here is to make themselves look like the saviour of struggling mums and we buy their product.

“Fed is best” is also hugely problematic. Of course a baby should be fed , I’ve not met anyone who suggests otherwise. This message usually ends up becoming that formula milk is just as good as breastmilk and that just holds no evidence. There are sometimes cases where breastmilk isn’t as good as formula but this is very rare (I’ve never come across a case). The transfer of the milk and other socio/psychological factors tends to be the main issue.

In practice, I’ve come across many women who have come across such messages who then feel pressure to not breastfeed. Others feedback that they have found themselves thrown out of “support” groups for saying they don’t want to give formula. This isn’t a one off, it’s happened too many times to count. These women then feel very let down. They have sought midwifery support and received little. Then sought online and been thrown out and this can have a huge negative impact upon a new mum.

“Fed is best” as a phrase can undermine those who are breastfeeding and wish to continue and can actually play into capitalist and patriarchal roles.   Capitalism requires people in work, making money, and mums at home, breastfeeding are not doing that. So if formula feeding is just as good as breastfeeding then a woman can surely go to work after birth and baby can be in childcare. Childcare also makes money. I’m potentially going off on a tangent here and a post for another day there in the role of mothers (that may yet form my thesis).

So, what can we use as alternatives?

How about we do nothing! Let’s just stop talking about what’s best for anything parenting. It’s not helpful or true and causes a whole load of undue stress.

Sure, let’s talk about what current research shows as safe, such as bedsharing safety. Whilst remembering that things change and any research is always an opinion on the data they have.

But, the only thing that is “best” is what a mum feels confident in doing.